In her 2007 New Yorker piece “The Meaning of Life,” Jill Lepore tells the story of the classic American board game The Game of Life, whose first iteration was developed by the Massachusetts engraver Milton Bradley in 1860. Lepore argues that each subsequent version of the game can be read culturally, a reflection of the values and aspirations of changing American generations from Bradley’s moralizing first edition (in his patent application, he claimed that it would “forcibly impress upon the minds of youth the great moral principles of virtue and vice”), through the 1960 revised edition (in Lepore’s terms, a celebration of “Cold War consumerist conformity”), to the modern version in which cash is replaced by a credit card and in which the winner is the one who has accumulated the most bucket-list experiences. 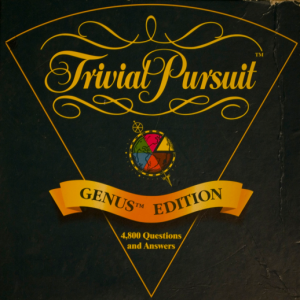 If the evolution of The Game of Life can be read as a commentary on Americans’ shifting notions of the good life, the changes in a different game genre might point, in a parallel way, to an equally significant cultural shift. In 1981, Chris Haney and Scott Abbott published Trivial Pursuit, the defining trivia game of its generation. The game challenges players (or teams of players) to answer questions in a number of different categories, rewarding successful completion of a category with the game’s distinctive colored wedges, socketed into a wagon wheel playing piece. The game’s appeal was immediate (30 million copies were produced between 1983 and 1985) and enduring, with total sales now over 100 million copies.

However, in 2005, Dominic Crapuchettes and Nate Heasley devised a very different take on the trivia game. In a drastic departure from Trivial Pursuit, their game, called Wits & Wagers, features questions whose answers are deliberately unknowable (at least for all but the narrowest specialists). A typical question might task players with something like “How many glasses of milk does the average dairy cow produce?” Instead of asking a single player (or team) to respond, the game invites all participants to write down an answer—a guess or an estimate, really—and then displays those answers for all to see. Rather than immediately evaluating the answers as right or wrong, Wits & Wagers then features a round in which players bet on whose answer is closest to the truth, before revealing the correct answer. Significantly, players receive points by betting on the best answer, even if it was not their own.

The difference here is striking. Whereas Trivial Pursuit rewards precise knowledge and grants victory to the one who demonstrates it, Wits & Wagers rewards the ability to sift through possible answers and estimate which might be the closest to correct. After all, if someone you are playing with happens to be a dairy farmer, their estimate about dairy cow milk production might be something to take into consideration—and to bet on.

Like Lepore’s analysis of The Game of Life, the shift in trivia games offers rich possibilities for cultural reading, but this time it involves the premium we as a society place on knowledge. In 1981, on the cusp of the computer revolution, there was still significant cachet in knowing facts of all sorts, and in the ability to recall that information upon demand. This, of course, has not entirely disappeared, as the continued popularity of trivia shows like Jeopardy would attest. However, in 2022, factual knowledge is a lot easier to come by. Most of us carry in our pocket a device that allows us to answer questions like those featured in Trivial Pursuit within seconds. Having that knowledge stored in our own heads might convey various peripheral benefits, but in brute terms we could argue that, at least on its most basic level, all it does is save us the time it would take us to Google the answer.

But what happens when we turn to Google and are confronted with several different potential sources? Which do we trust? 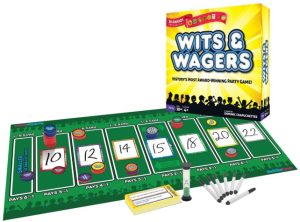 Here is where Wits & Wagers represents the new intellectual skills prized in the 21st century, not the possession of knowledge per se, but the ability to sift among various possibilities and determine which is the most accurate. In the case of a question like yearly dairy cow milk production, the answer is perhaps of little consequence, but when it comes to issues such as which information sources or experts we trust to provide an accurate take on politics, finances, or world affairs, the stakes become much higher. In this regard, Wits & Wagers becomes a game for our time, demanding that we not accept all answers as equal, and instead weigh them against our own experience and our estimation of their providers’ trustworthiness.

We should not dismiss the concerns of Socrates or Carr too lightly. Technology certainly has an effect on us, and specifically in this case on what mental tasks we relegate to our mechanical aids and what tasks we reserve for our own brains to work out. However, as the contrast between Trivial Pursuit and Wits & Wagers would suggest, “real intelligence” (to use Plato’s term) might look different across the ages, even in the narrow historical period from 1981 to 2005. In a world in which the pursuit of facts has become increasingly trivial, the ability to evaluate those facts may be the mark of true intelligence.