Over the course of the conference’s two days, more than thirty presentations were given on topics ranging from public history and public art to database design and the Brother knitting machine. 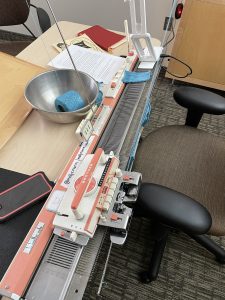 I was also thrilled to hear Max Schleicher, a graduate student at the University of Utah, discuss his work modeling shifts in contemporary American poetry. Poetic language can be difficult to model with computational approaches such as topic modeling because of the nature of poetic language. Schleicher conjectured that the blurb on the back of the book would be an easier place to draw information about poets over the years. Not only do such blurbs eschew poetic language, but they also tend to formulaic structures (publisher’s description, bio, and promotional blurbs) that work well for computers. Based on his findings, there appears to be an uptick in poems responding to grief in the mid-2010s. The jury is still out, however, whether this says more about the state of poetry or about what blurbers tend to see among poems.

A highlight of the conference was the keynote presentation by Kenton Rambsy on data-rich African American stories. He discussed his work on, among others, Edward P. Jones and Jay-Z. Both Jones and Jay-Z are highly specific when describing, respectively, Washington D.C. and New York such that Rambsy has been able to map their references. Combining their stories with other data layers, such as census records help to show how neighborhoods in D.C. have changed over the time that Jones has been writing. Landmarks around the city also help date when individual stories in Lost in the City (1992) and All Aunt Hagar’s Children (2006) are set. Going beyond location, Rambsy also discussed the gender breakdown of characters in Jones’s stories: there are 524 different named characters, and while men outnumber the women, the women play a far more important role in the amount of time they are allowed to speak. Rambsy’s book, The Geographies of African American Short Fiction (2022, University of Mississippi Press) will contain much more of his analysis.

Since DHU is a small conference, we tend to draw as many students—both undergraduate as well as graduates—as we do faculty. A full half of the conference presentations were done by graduate students, and teams of BYU undergraduate students helped lead a workshop on WordCruncher and gave talks with History faculty members Grant Madsen and Edward Stratford into congressional speech and Assyrian cuneiform, respectively. While most of the participants were predictably from Utah, we were pleased to be joined with participants from Nevada, California, Oregon, Virginia, and China. The infrastructure that BYU has put into place in response to the COVID-19 pandemic made it possible for us to host remote participants whose travel had been interrupted. While we could have easily facilitated the entire conference over Zoom, we heard repeatedly how much people appreciated being able to gather again, even with COVID precautions still very much in place.

We are grateful for the role we were able to play in putting on the conference and deeply appreciate the Humanities Center, the Harold B. Lee Library, and the College of Humanities for being sponsors of this year’s conference.